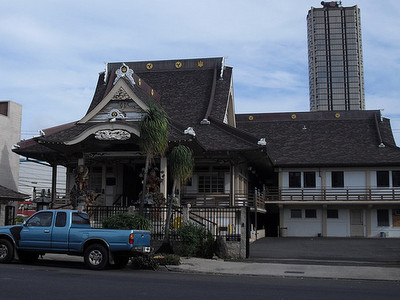 The Hawaii Shingon Mission in Honolulu

Before the first temples

Buddhism got a slightly late start in Hawaii as compared to Christianity, leading Kagai Sôryû, a Jôdo Shinshû priest who arrived in the islands in 1889, to suggest that efforts to bring Buddhism to Hawaii should incorporate some kind of acceptance of the Christian God, in order to protect against Buddhism being opposed as a "foreign" religion. His suggestion was rejected, however.

The first Japanese Buddhist temple to be established in the islands was a Pure Land Buddhist temple built by Okabe Gakuo at Hamakua on the Big Island of Hawaii in 1894-1896. Three years later, in response to requests from the Japanese community in Hawaii, Miyamoto Keijun came to the islands as a representative of the Jôdo Shinshû sect, to determine the possibility, or necessity, of establishing a formal branch temple. Finding that the community's religious needs were being served chiefly by a number of unofficial, self-appointed "priests," who Miyamoto identified as unscrupulous fraudsters, the Hongan-ji arranged for the establishment of a formal branch temple, and dispatched Satomi Hôni as the first official priest to head it. That first temple, the Honpa Hongwanji Mission,[1] established in 1898, still stands and operates today.

Much of the Japanese community in Hawaii came from the southern/western parts of Japan, where Jôdo Shinshû was particularly strong. So, most of these people were Jôdo Shinshû adherents already, and did not need to be converted, or missionized to. Nevertheless, and despite the fact that Buddhist temples in Japan are never called "missions," this first Buddhist temple and most of those which came after it, came to be called "missions," perhaps in emulation of the strong Christian missionary community present in Hawaii since the 1820s. Many Buddhist temples in Hawaii today continue to be called "missions," even though Buddhists as a whole generally do not engage in proselytization or missionary efforts, and even though their congregations are well-established. Imamura Emyô, also known as Imamura Yemyo, came to aid Satomi in 1899, and took over leadership of the temple the following year.

Nichiren Buddhism established its first temple in the islands in 1900, Sôtô Zen in 1903, and Shingon Buddhism in 1914, but Jôdo Shinshû remained dominant. Plantation owners began making financial contributions to the temples in 1901, a practice which continued until 1920, when the temples actively supported the Japanese workers.

The Okinawan community in Hawaii got its first temple in 1935. The Jikôen Hongwanji, founded by Yosemori Chiro, who had arrived in the islands in 1921, remains a major center for Okinawan cultural activities in Honolulu today.[2] Rev. Jikai Yamasato, head of the temple for a time, was a particularly prominent figure in the Okinawan community in the mid-20th century.