The Hôjô were founded by Ise Shinkuro (Sôun) and therefore were no relation to the earlier family of Regents (shikken), whose name was apparently borrowed for its prestige value. They ruled from Odawara castle in Sagami province from around 1520 until their defeat at the hands of Toyotomi Hideyoshi in 1590. During that time they expanded throughout the Kanto at the expense of the Uesugi and by 1590 could claim control of much of the region. Although the Hôjô enjoyed martial success, their domestic developments make them a favorite subject among scholars.

The origins of the Ise family are unclear, and certain scholars place their homeland as Bitchû Province while others maintain that they were Kyoto natives.

Though the clan suffered a significant defeat at the 1590 siege of Odawara, a branch of the family was granted a domain at Sayama in Kawachi province, and continued to rule throughout the Edo period. 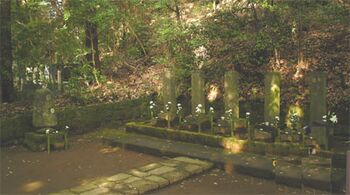 Grave of the five Hôjô lords, plus Ujitsugu (far left), established in 1672 in Sôunji, Yumoto.