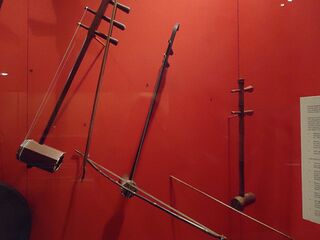 From left: A sihu, an erhu, and a jinghu, on display at the Metropolitan Museum.

Húqin is a category of Chinese musical instruments, spiked fiddles played with a bow. These include the two-stringed erhu (perhaps the most well-known of Chinese instruments), as well as similar instruments such as the jinghu used in Beijing opera, and the four-stringed sihu. Many other variations have fallen out of use or prominence.

The huqin was first introduced into China from the Mongol peoples, during the Yuan Dynasty. Unlike with Western bowed instruments like the violin and viola, huqin have their bow placed between the strings in such a fashion that it is essentially irremovable without removing the strings. It is sometimes said that this design derives from the Mongol desire to not lose their bows while carrying the instruments on horseback.