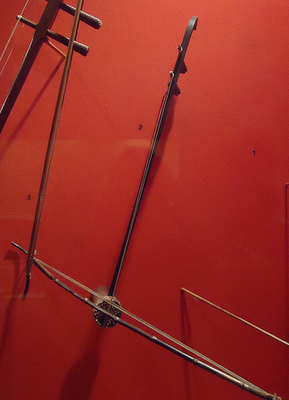 An erhu on display at the Metropolitan Museum

The erhu, a two-stringed bowed spike fiddle, is perhaps the most prominent or well-known of traditional Chinese musical instruments. It belongs to a family or category of spike fiddles known in Chinese as húqin.

Closely related to the Okinawan kûchô, the erhu incorporates a small round or hexagonal body (soundbox), covered typically in snakeskin, and a bow which is held between the two strings; unlike the bow of a Western instrument such as a violin, the erhu bow is not easily, or typically, removed, and is played between the strings rather than atop them.

The erhu is often played as a solo instrument, as well as in traditional ensembles, modern orchestras, and in providing the music for theatre, including in jingju (Beijing opera). In the theatre, it someimes doubles the melody played by the jinghu ("capital fiddle") but at a lower octave, and is also used to accompany singing by female roles.

In southern China and Taiwan, the instrument is often called a nanhú (南胡, "southern fiddle").