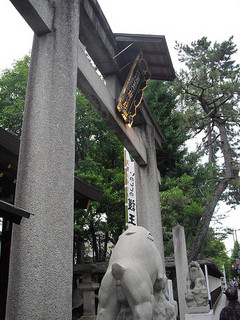 Goô Shrine is a Shinto shrine in Kyoto enshrining Wake no Kiyomaro who aided in the construction of Heian-kyô when Emperor Kammu ordered the move of the capital here, as well as Kiyomaro's older sister Hiromushi.

The shrine used to be within the grounds of a Protection of the Nation Shrine (護国神社, Gokoku Shrine), but it was moved to its current location in 1886.

Wake no Kiyomaro, who is enshrined here, is known for having defeated in 769 the treachery of the monk Dôkyô's claim to a divine message from Usa Hachiman declaring him to be the next emperor. This earned Kiyomaro the ire of Dôkyô, and he was sent off to Ôsumi province, but along the way, he was sent to Usa Hachiman in Buzen province, in thanks for his acting to protect the unbroken line of emperors. Three hundred boars are said to have appeared, surrounding him, and leading him the ten ri to Usa Hachiman, protecting him from any dangers along the way. Furthermore, a grievous leg injury suffered on the road was miraculously healed.

This shrine praises those boars which protected him as spirit boars, and a pair of stone boars stand in place of the more typical komainu lion-dogs in front of the main entrance to the shrine, as well as in front of the main worship hall as members of his divine retinue. On the first day of the 11th month (November), the shrine hosts a Boar Festival. Because of the associations with Kiyomaro's story, many who have leg ailments or injuries, or those seeking safe travels and the avoidance of disaster, come to pray here.

Kiyomaro's sister Hiromushi had deep compassion, and since she aided the city's orphans, she came to be called "the goddess of upbringing", and worshipped.