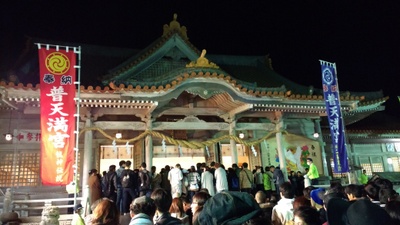 Futenma Shrine is a Shinto shrine in the town of Ginowan, on Okinawa Island. It is considered one of the Ryukyu Eight Shrines. It is paired with the neighboring Buddhist temple, Jingû-ji.

The shrine is dedicated to various kami associated with Kumano Gongen, and to a number of deities of the traditional Ryukyuan religion, including nirai kanai, and deities of the sun, heaven, earth, and sea.

The site began as a sacred space of the traditional Ryukyuan religion, organized around a large natural cave where the various gods or spirits were worshiped. Around 1450-1460, the Japanese worship of Kumano Gongen was incorporated into the site. By the early 17th century, it was considered one of the Ryûkyû Eight Shrines, alongside six other Kumano Gongen shrines, and Azato Hachiman-gû.

The cave stretches some 280 meters, and contains three major open areas where worshippers pray and leave offerings. Fossilized remains of ancient Ryukyuan deer, boars, and muntjac from over 20,000 years ago have been found there.

Historically the shrine faced out over Jinon-nanmachi (J: Ginowan nami matsu), a major road connecting Ginowan and Urasoe and lined with numerous centuries-old pine trees. Sadly most of these trees were lost in the Battle of Okinawa.[1]