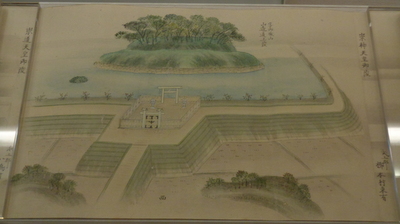 Emperor Sûjin's kofun, as depicted in a handscroll by Okamoto Tôri

Emperor Sûjin is traditionally said to have been the 10th Japanese emperor; traditional counts place his rule around 97-30 BCE. According to some accounts, he may have founded Ise Shrine.[1]

If he was a historical figure, and not merely mythical, Sûjin may have lived several centuries later, in the mid-3rd century, and may have been the first Yamato ruler, after the mysterious Yamatai confederacy fell into disunity.

Conditions on the Archipelago

To understand Emperor Sujin's place in Japanese history, it's necessary to analyze the waves of immigrants and imported technology that arrived from China and Korea before the 4th century.

The native Jomon people, who occupied the Japanese islands from 8500-300 B.C., were gradually displaced by continental immigrants during the 4th and 3rd centuries B.C. These waves of immigrants coincided with the petering out of the Zhou Dynasty of China.

After the birth of Christ, from 100 A.D. to 250 A.D. (late Yayoi), warfare spread for the first time on the Japanese archipelago. Agriculture created an imbalance of power between villages, which was only rectified by fighting.

Another wave of continental immigrants came around the 3rd century A.D. However, because these emigrants met the previous continental immigrants who had similar warring technology, the transition to Japanese soil was not as smooth as had previously been witnessed in the Jomon Period. Sweeping the archipelago from West to East, the newcomers displaced the Yayoi peoples.

Prince Mima (Emperor Sujin) is believed to have been one of these aggressive newcomers.

During the 7th century, texts such as the Fudoki, Kojiki, and Nihon Shoki rewrote or created myths and stories to glorify important figures, or give heavenly precedent to perhaps questionable earthly action. One such example is the following from the Hitachi no Kuni Fudoki.

This article is a rough draft which is in need of cleanup (grammar, spelling, corrections, links, formatting, etc.). You can help SamuraiWiki by editing it. Click here for a list of articles that have been tagged as a draft copy.
Retrieved from "http://samurai-archives.com/w/index.php?title=Emperor_Sujin&oldid=32237"
Categories: