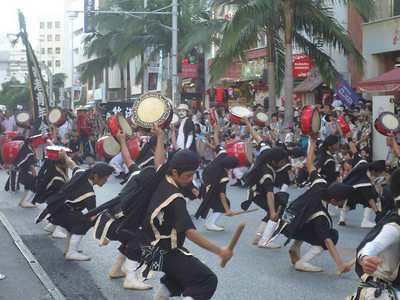 Members of the Makiminato seinen kai performing at the 10,000 Man Eisa Festival, August 4, 2013

Eisa is a prominent element of Okinawan processional festival dancing and drumming. Though originating out of Obon celebrations, in which eisa was performed to help escort the revered ancestors back into the land of the dead at the end of the observance, eisa has now come to be such a prominent and popular element of Okinawan performing arts that it is frequently performed throughout the year, particular in contexts when performing for tourist audiences.

Eisa incorporates elements from the early modern performances of traveling chondara (京太郎) musicians, and of ninbucha (念仏者), Buddhist devotees who traveled to people's homes and chanted nenbutsu, rang gongs (shôko), performed puppet plays featuring the Buddha (O: futuki), and sang other songs on special occasions, including during New Year's, Obon, and times of mourning, taking part as well in funeral processions. The head clan of the ninbucha, known as the shidu, lived in an area of Shuri known as Annya Village (行脚村) up until 1945. Both the chondara and ninbucha traditions also influenced kumi udui and other Okinawan performing arts as well.[1]