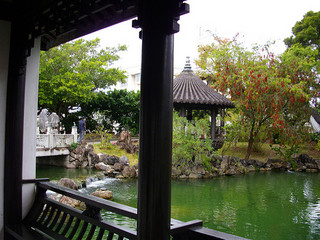 Private gardens, sometimes known as yuánlín (園林, "garden grove"), flourished in the 16th-18th century as literati spaces. Some estimates indicate that by the mid-17th century, there were a total of as many as 2,000 garden houses in Suzhou, Nanjing, Yangzhou, Beijing, and Taicang.

For the urban literati, the garden represented an escape from urban life, and offered "the nostalgic pretense of rural seclusion within the city."[1] It was a space for relaxation, contemplation, and cultural activity, and represented the greater wilderness, or the ideal imagined countryside retreat, in miniature, with well-placed rocks and a small pond standing in for mountains and lakes. The garden also represented something of a microcosm of cosmic rhythms, containing a blend of the positive and negative, dark and light, dense and sparse, open and walled-in, and controlled and natural. It was at the same time a space paradoxically encompassing both a show of elite wealth and status, while alluding to an ideal of rustic rural simplicity, and hosting both urban elite social activities and the solitary activities of the literatus imagining himself alone in the countryside/wilderness in a Daoist vein.

Literati felt a strong connection to their gardens, with many taking their poetry names from the names of their gardens, or vice versa. Poetry collections and other writings were often named after one's garden, and even those who could not afford to own or maintain a garden created imaginary ones in their poetry and paintings.

Over the course of the Ming and Qing Dynasties, as many in the merchant class grew wealthier, gardens became the province not only of scholar-officials, but of merchants seeking to emulate the literati lifestyle as well.

The garden culture and style of the Jiangnan region (Suzhou, Hangzhou, etc.) began to be incorporated into the Imperial gardens at Beijing during the reign of the Kangxi Emperor (r. 1661-1722), with the expansion of the Yuanmingyuan (Old Summer Palace) by the Qianlong Emperor in 1736-1753 marking the more complete reorganization of the Imperial gardens in the image of southern Chinese private gardens.

Many identify the year 1820, the year garden designer Ge Yuliang (1764-1830) completed his last great work, as marking the end of this flourishing age of gardens.