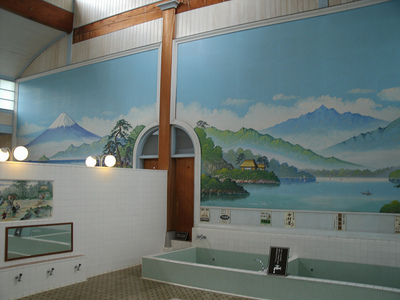 Interior of Kodakara-yu, a bathhouse at the Edo-Tokyo Open Air Architectural Museum

Early European visitors to Japan commented on baths and bathing practices there, finding them unusual and surprising, given that Europeans themselves very rarely bathed at that time. Natural hot springs can be found throughout Japan, and baths for relaxation or therapeutic purposes with either geothermally or artificially heated water remain strongly associated with Japan today.

The word yu 湯, referring to hot water, and thus closely associated with baths or bathing, has a very old history, going back to some of the earliest references to natural hot springs. By contrast, the word furo 風呂, more directly referring to a bath, only came into use around the 13th century.

References to bathing or purification rituals can be found in materials going as far back as the Kojiki. Various purification rituals with cold water may have existed since before the written record, and continued to be practiced by emperors, courtiers, and others down through the centuries, long after the introduction of hot water bathing. Ritual "baths" with cold water, often not involving true immersion in the water, were performed on special occasions, including New Year's, and after a new emperor took the throne, a new imperial consort was named, or a new Crown Prince was named, as well as for a newborn's first bath.

Hot water bathing, meanwhile, came with the introduction of Buddhism in the 6th century. Temples began to install bathing facilities, often with systems for heating water and distributing it to multiple wooden tubs. Notionally these were for the purposes of purification, but true washing and bathing took place here, not mere ritual. Temples also installed steam baths for purification purposes; at Zen temples (introduced to Japan in the late 12th century), steam baths were a site for meditation.

Many temples also had baths (whether these were separate baths from those used by the monks is unclear) where the poor and needy were invited to come and bathe. The terms for these types of baths, including seyoku 施浴, kudoku 功徳, and ryûgan 立願, suggest their religious or virtuous orientation. For the temples, as well as for the Imperial or courtly patrons who sponsored the establishment of these baths, these were seen as religiously meritorious undertakings. Baths were sometimes located within the existing walls of a temple, but other times, patrons would donate land, called yuden 湯田 or furoden 風呂田 (lit. "bath fields") for the construction of bathing facilities. Figures who sponsored the construction or operations of such baths include Empress Kômyô (701-760) and Shogun Minamoto no Yoritomo (1147-1199).

Members of the Imperial Court bathed regularly[1], from at least the 10th century onwards, if not earlier, however little is known about how they bathed.

Meanwhile, natural hot springs, as well as certain types of manmade baths, came to be used for therapeutic purposes (kusuriburo, lit. "medicine bath"), following a separate, secular historical trajectory from religious baths. Words such as "recuperation" often come up in records of a visit to such a bath. In the case of manmade therapeutic baths, the therapeutic aspect mainly came from the use of certain herbs, or sea water, used in the bathing water or steam. Ishiburo (or iwaburo) were made by piling up rocks and then heating them; another form, known as kamaburo, was essentially a large domed structure within which a steam bath could be produced. Courtiers and other members of the elite also often had private baths within their manors where they would add various herbs or grasses to create different therapeutic effects.

Several key developments in bathing culture emerged in the late medieval period (though it's not clear exactly when). Firstly, bathing first began to be seen as a communal experience and as a social activity. Second, bathing at this time first came to be associated with physical cleanliness and not merely spiritual purification or therapeutic purposes. Scholar Lee Butler suggests that hygienic bathing, that is, bathing with the explicit idea in mind of physical cleanliness, likely emerged or grew to wide popularity (among those of the elite classes who had access to baths) in the 15th-16th centuries. However, prior to the Edo period, it is difficult to find explicit references to this in diaries or other materials. When courtiers or other elites write of visiting a friend's bath for a social event, they often speak of relaxation, or recuperation, but not explicitly of getting clean.

In the 14th-15th centuries, it became popular among elites to hold social bathing events closely associated with Buddhist spiritual benefit. People would be invited to an elite person's private bath, or to a temple's bath, for a private, exclusive event at which they would also light incense, give offerings, say prayers or chants, and in doing so earn spiritual merit. The phenomenon of owning a private bath within one's house (or its grounds) also expanded dramatically in the 15th century.

In post-Ônin War Kyoto, when so many communal baths, temples and the like had been destroyed, it became common among courtiers and Buddhist priests to bring wood to social bathing gatherings, such that everyone contributed to heating the bath, in an activity known as gômokuburo (合木風呂, "coming-together wood bath").

Private, commercial bathhouses began to appear in the 14th century, and became more widespread in the 15th, predecessors to the modern sentô 銭湯, where the proprietors make a living by charging a fee for use of the facilities. Some baths became so well-known that the neighboring intersections came to be known by the name of the bath, though for many baths it was precisely the other way around (some diaries include statements such as "went to the bath at Gojô-Horikawa."). Most bathhouses at this time were of limited size, and could be rented out as a whole by a group, paying a certain amount to essentially reserve the entire bathhouse for their own use, closing it to other visitors for a span of time.

As public/commercial bathhouses proliferated, and the act of bathing became more popular, elites often found themselves visiting public or commercial bathhouses (e.g. when the more exclusive ones were rented out by another social circle), where they came into contact with commoners, though little mention of these interactions is found in their diaries. Lee Butler suggests that baths came to be a site where status distinctions fell away, at least to some extent; whether courtiers and commoners shared conversation is unclear, but it is believed that it became not entirely uncommon for them to share a bath.

Communal bathing could take place among members of any number of types of social groups. Most often, we are led to believe that friends or colleagues, i.e. fellow courtiers, would meet up to go to the bath together; gatherings among members of a Buddhist circle or prayer group were also common. Bathing communally as a family, or as a household (the latter term including retainers, servants, and other members of one's "house" who were neither directly related to nor formally adopted by the head of household) likewise became more common in the 15th-16th centuries.

Though natural hot springs, and the bathing facilities associated with them, could be found farther afield, it seems that up until the Edo period, Kyoto and the so-called "Home Provinces" or Kinai were the chief center of activity for public and private baths. Lee Butler notes that it was only when the political/military action of the Sengoku period came to be more focused on Kyoto after 1568 that the samurai class engagement in bathing begins to appear in written sources.

Oda Nobunaga's Azuchi castle did not include bathing facilities, but Toyotomi Hideyoshi included a steam bath in his Jurakutei, which was then moved to Nishi Honganji when the Jurakutei was demolished. Baths were popular enough among the samurai class by this point that during Hideyoshi's invasions of Korea in the 1590s, his generals built baths in the military camps; Katô Kiyomasa is known to have even built one on a ship. Tokugawa Ieyasu, likewise, had baths built in many of his residences; one was even made of mulberry wood brought back from Mexico by the merchant Tanaka Shôsuke in 1610.

The urbanization and growth of the commoner class of townspeople (chônin) or merchants saw the dramatic expansion of bathhouses and bathing on a commoner/popular level.

One popular phenomenon often seen in ukiyo-e prints which emerged in the Edo period was the "bathhouse girl," or yuna 湯女.