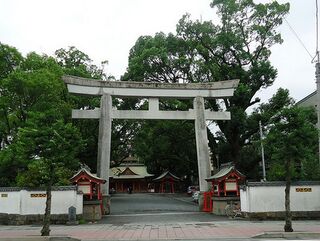 The shrine was established in the late Heian period, or perhaps the early Kamakura period, as a branch of Ôsumi-shô Hachiman (today Kagoshima Shrine, and as the main shrine of the Arata shôen (manor).

Smaller shrines to subordinate gods are located at the cardinal points outlining the former boundaries of the manor.

The shrine is also associated with protection from venomous adders, and sells charms (omamori) to help ward off the snakes.

A large camphor (kusunoki) tree on the grounds was designated by the city as a protected plant in 1974.