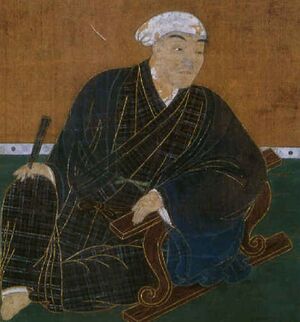 Yoshitaka was the son of Kuroda Mototaka, a samurai originally from Bizen who ended up in the service of the Odera of Harima. The Odera were in fact nominally vassals of the Akamatsu, whose power by 1570 had ebbed to such an extent that Akamatsu Yoshisuke was essentially living under the protection of the Odera at Himeji.

Mototaka took the name of his new lords and rose to become one of the Odera’s chief retainers and the holder of Himeji Castle. In 1576, Mototaka’s son Yoshitaka noted the rise of the Oda clan, and urged Odera Masamoto to make a pact with Oda Nobunaga, who was presently at war with the Môri clan. It happened that Masamoto favored the Môri - as did many of the other clans of the region - and made no overtures to Nobunaga. Kuroda therefore contacted Hashiba (Toyotomi) Hideyoshi and managed to secure an audience with Nobunaga in Kyôto himself. Nobunaga, who had already ordered Hideyoshi and Akechi Mitsuhide to march west, was pleased at what proved to be enthusiastic support on Yoshitaka’s part. Harima was critical to the campaign against the Môri - both to aid in the isolation of the Ishiyama Honganji and as the gateway to Bizen and Mimasaka. Himeji was at the time not particularly impressive, but it’s surrender to the Oda forces would force the Odera to follow suit, as well as, of course, the Akamatsu. After Yoshitaka’s father had been convinced, this was just what happened.

Yet in 1578 Araki Murashige, an Oda vassal who controlled Itami Castle in Settsu, rebelled; Odera Masamoto, who had begrudged the Kuroda’s political activities, swung back toward the Môri. Yoshitaka urged Masamoto to reconsider his stance, and in response Masamoto sent him on a diplomatic mission to Itami. Once there, Kuroda was thrown into a cell - evidently at Odera’s insistence. Yoshitaka eventually escaped, but at the cost of an injury that left him with a pronounced limp.

Yoshitaka became a close associate of Hideyoshi, who considered him as close to his heart as his half-brother, Hidenaga. Yoshitaka proved himself worthy of Hideyoshi’s friendship in the campaigns on Shikoku (1585) and Kyushu (1587), after which he was rewarded for his services with a 120,000-koku fief in Buzen. In the Second Korean Campaign Hideyoshi entrusted Yoshitaka to act as chief advisor to the leader of the invasion force, the young Kobayakawa Hideaki.

Following Hideyoshi’s death in 1598, Yoshitaka drifted into Tokugawa Ieyasu’s camp due in large measure to a dislike of the alternative – Ishida Mitsunari. In the Korean Campaign of 1597-98, progress had been marginal, prompting Hideyoshi to dispatch Ishida Mitsunari to inspect the expeditionary forces. Ishida had accused Kobayakawa Hideaki of incompetence, a charge that saw Hideaki brought home and indirectly besmirched Yoshitaka’s honor. In addition, Mitsunari had dropped a few disparaging comments about both Yoshitaka and his son Nagamasa. In 1600, therefore, the Kuroda threw in their lot with Tokugawa; Nagamasa went to serve in Ieyasu’s army while Yoshitaka scrounged together a force to fight on Kyushu. Yoshitaka managed to link hands with Kato Kiyomasa (who held considerable land in Higo) and together the two of them brought down a number of castles affiliated with the ‘western’ forces in Bungo and Chikuzen. They were preparing to invade the Shimazu’s lands when the war came to an end.

After Sekigahara Yoshitaka essentially retired, though he used his political influence afterwards to arrange for the life of Otomo Yoshimune to be spared, and helped the Shimazu keep their domain.

Kuroda was a Christian, evidently thanks to Takayama Ukon, and was baptized with the name Dom Simeão. He had assisted Otomo as the latter was also a Christian, and had arranged for the rescue of the Jesuit Bungo mission when that province was being invaded by the Shimazu in 1584.

Kuroda Kanbei was a gifted strategist and a man of some charisma, noted for his decency of character and loyalty to Hideyoshi. At the same time he was crafty and never hesitated to advance the cause of his family, although his frankness on that score made him all the more colorful and endearing.