1860 Japanese Embassy to the United States 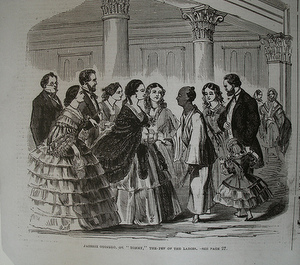 The first Japanese embassy to the United States took place in 1860. The ambassadors traveled to San Francisco by steamship from Yokohama, stopping for supplies in Honolulu; they then traveled to Washington DC via Panama, and spent two weeks in New York City before returning to Japan.

The chief nominal purpose of this mission was to exchange the Japanese- and English-language versions of the Treaty of Amity and Commerce signed two years earlier.

The more than 170 members of the embassy, along with a number of American escorts, departed Yokohama for San Francisco on 1/19 (Feb 10), aboard a number of ships including the USS Powhatan, and the Kanrin Maru. The Powhatan, captained by Lt. James Johnston, carried the three lead ambassadors and their core entourage, along with the Treaty of Amity and Commerce signed by Japanese officials and US diplomat Townsend Harris onboard that same ship two years earlier, but which still needed to be ratified by the US Congress. The Kanrin Maru, meanwhile, commanded by Navy Minister Kimura Kaishû, captained by Katsu Kaishû, and with a crew of 96 Japanese plus some number of Americans (incl. one American officer), carried the remainder of the members of the embassy.

The Powhatan stopped for supplies at Honolulu, where the ambassadors met with King Kamehameha IV and Queen Emma, before continuing on to California. The Kanrin Maru was damaged in a storm, and returned to Japan after repairs in San Francisco, while the remaining 76 samurai members of the embassy continued their journey onboard the Powhatan. After sailing south from San Francisco to Panama, the members of the embassy crossed the narrow Panama Isthmus by rail, and then were transported to Washington DC onboard the USS Roanoke.

Diaries by members of the embassy, such as Kôkai nikki by Vice-Ambassador Muragaki, reveal much about the Japanese thoughts and impressions upon making such a journey, including an attitude on Muragaki's part that despite their curiosity, the samurai had to refrain from indulging themselves too much in any of the activities, in order to maintain their dignity as representatives of their great nation.[2]

By int. 3[3], the ambassadors had arrived in Washington DC. On int.3/4 (May 24), President Buchanan held a formal banquet for them at the White House.

The Japanese spent three weeks in DC before moving on to Baltimore, Philadelphia, and then New York.

The embassy arrived at New York's Pier I on 4/23 (June 16), aboard a steamship called Alida. They appeared in a procession up Broadway to Union Square, and then back down to the Metropolitan Hotel on the corner of Broadway & Prince Street. They would stay at the Metropolitan for the duration of their two-week stay in New York; a total of 300 flags were flown at the hotel during their stay.

Over the course of their time in New York, the ambassadors met numerous figures of note, and were entertained at a number of events. The total cost of the festivities is said to have been roughly US$82,000. Two days after their arrival, they received several distinguished guests at the hotel, and paid a visit to a photo studio, a rather new experience for many of the samurai. This was followed by a parade ending at City Hall, where NY Mayor Fernando Wood held a reception for them with Gov. Edwin Morgan in attendance as well.

Formal activities were canceled the following day (5/1; Jun 19) on account of rain, but resumed the day after that, with formal visits to various sites in Brooklyn, including the Navy Yards and Green-Wood Cemetery. The lead ambassadors met with a committee from the local Chamber of Commerce while other members of the embassy went shopping, and attended concerts.

The samurai traveled to the newly completed Central Park the following day (5/3; Jun 21), where they met with the park's designer, Frederick Law Olmstead, and had a Japanese tree transplanted their in honor of the event. Later that day, they attended a garden party held by New York Herald publisher James Gordon Bennett at his estate in Washington Heights.

June 22nd (5/4) saw the samurai enjoying shopping, and visiting schools, prisons, Trinity Church, Barnum's Museum, printing presses, the city's Customs House, and other sights around the city. They met with friends of Townsend Harris at the Metropolitan Hotel on June 25th (5/7), and enjoyed a ball at the hotel that evening hosted by August Belmont. The following day, the lead ambassadors paid a visit to Jane Perry, widow of Commodore Matthew Perry.

Members of the embassy spent the following day (5/9; June 27) shopping, and visiting sites including harbor fortifications and a rubber factory. A set of sword blades forged in 1859 specifically for this purpose by swordsmith Kawai Hisayuki were formally presented the following day to three military captains in recognition of their "unceasing kind services" in organizing the reception of the embassy. Captain Samuel Francis DuPont (1803-1865) was accompanied by two men by the names of Capts. Lee and Porter in receiving this gift.

The embassy boarded the USS Niagara on 5/12 (Jun 30), and departed the following day, sailing across the Atlantic, and stopping in Angola, Batavia (Dutch East Indies), and Hong Kong, before arriving in Edo in the 9th or 10th lunar month (Nov 1860), becoming the first Japanese mission to circumnavigate the globe.