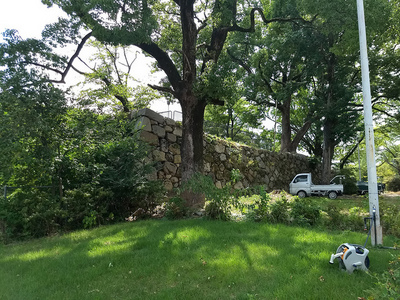 A portion of the ruins of Yodo castle

Yodo castle was the chief castle of Yodo han. It was located at a vital strategic point in what is today Fushimi Ward, Kyoto City, where the Uji, Kizu, and Katsura Rivers merge to become the Yodo River. The associated castle-town of Yodo-juku was considered the 55th station of the Tôkaidô from Edo, along the extension of the highway linking Kyoto and Osaka.

A different castle by the same name, located some 500 meters to the north, is associated with Yodo-gimi (second wife of Toyotomi Hideyoshi).[1]

Shogun Tokugawa Hidetada ordered Matsudaira Sadatsuna to build a castle on the site in 1619 so as to maintain control over this vital location while the nearby Fushimi castle was demolished. Construction began in 1623 and was completed in 1625 using materials from the dismantled Fushimi castle. The tenshu from Nijô castle was also relocated to Yodo at this time.[2] The following year, when Hidetada and his son Tokugawa Iemitsu traveled to Kyoto, they stayed overnight at Yodo castle.

Nagai Naomasa was made lord of Yodo in 1633, but his line did not hold the castle for long. After several other changes of castellan, Inaba Masatomo was transferred from Sakura han to Yodo in 1723/5; the Inaba clan would remain lords of the 102,000 koku domain of Yodo for the remainder of the Edo period.

The Kizugawa river altered its course in 1637 allowing for an expansion of the castletown around Yodo. Where the river had previously run to the north of the castle, it now ran to the southwest; the left bank became the right bank. Some of the expanded land was then used to establish archery grounds, horseriding grounds, warriors' residences, and gardens.[3]

The castle was encircled by two or three layers of moats, and became a famous sight (meisho) along people's river journeys. The five-story square-shaped tenshu (main keep tower) removed to Yodo from Nijô castle stood on the site until 1756, when it was struck by lightning and burned down.

The lord of Yodo played a role in overseeing travel up and down the Yodo River which connected Fushimi and Osaka; a special set of piers or stone steps, known as tôjin gangi and located near the taxation office about 200 meters north of the castle, were set aside for the exclusive use of Korean embassies to Edo, as they boarded or disembarked from riverboats they used to travel up and down the Yodogawa.[4]

Large waterwheels some eight meters in diameter were located to the north and southwest of the castle.

This article is a placeholder or stub. You can help SamuraiWiki by expanding it.
Retrieved from "http://samurai-archives.com/w/index.php?title=Yodo_castle&oldid=43054"
Categories: