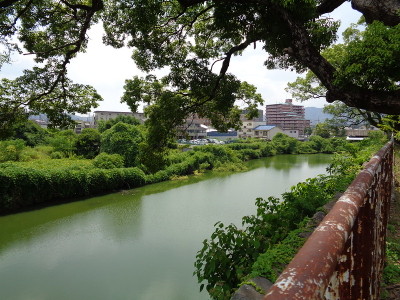 The Yodo River as seen from the former site of Yodo castle, in Kyoto's Fushimi Ward

The Yodogawa is a a slow-moving river which forms beginning in Yamazaki (near Kyoto) from the confluence of the Kizu, Uji, and Hozu Rivers. From Yamazaki, the Yodo flows some 79 kilometers, through Fushimi, to Osaka Bay. As Kyoto lies inland and is not directly accessible by sea, the Yodo served traditionally as a major thoroughfare carrying people and goods between Kyoto (via Fushimi) and Osaka; via Osaka Bay, it thus connected Kyoto to the remainder of the archipelago, and beyond.

The Yodo’s prominence as a transport route declined only with the opening of the first Kyoto-to-Osaka rail line, in 1910. As early as the Heian period, if not earlier, people were regularly traveling between the two cities, along the Yodo, with the trip generally taking less than a day. Kawajiri, a port just north of Osaka (then called Naniwa), was established at the mouth of the Yodo in the Nara period, as one of the chief five harbors of that period. Over the ensuing centuries, it was as a result of the very active volume of traffic along the Yodo that places like Yamazaki and Eguchi developed into bustling port towns, with prosperous inns, restaurants, boat-related services, and prostitution.

In the 15th century, some three hundred and sixty checkpoints were established along the length of the river, chiefly in order to charge tolls. A single checkpoint (sekisho) could bring in as much as 1000 kanmon a year. Before long, a special class of boats called kashosen or kashobune, often associated with local merchant guilds (za) had emerged, which carried licenses that granted them free passage through the checkpoints. By the Edo period, these privileges had been extended to a far larger number of boats, carrying a wide range of goods. Kashosen came to include 30-koku boats based in Osaka, Moriguchi, Ôtsuka, Kanzaki, Amagasaki, and elsewhere along the river, carrying goods such as charcoal, rice, salt, and fish. They competed with boats based in Fushimi, often a bit smaller at 20-koku, which were often known simply as Fushimi-bune, or “Fushimi boats.” Passenger ferries also operated on the river, with one particular set of 30-koku boats, for example, traveling between Fushimi and the Hakken-ya on the banks of the Kizu River, between Tenjin-bashi and Tenman-bashi in Osaka, twice a day. Larger boats going up the river were generally pulled upriver by ropes, by workers standing on the sides of the river; they alternated banks nine times over the length of the river, pulling from the left bank for one whole stretch, and then the right bank for the next stretch of several tens of chô.

Ryukyuan embassies to Edo completed the Osaka to Fushimi leg of their journey by traveling up the Yodo in this fashion, aboard a group of four elegant riverboats known as kawa gozabune, pulled upriver by workers on the banks. The kawa gozabune were the pleasure crafts of daimyô, commissioned from various domains for the Ryukyuans’ use. Accompanied by some sixty cargo boats and the like, they traveled upriver in grand parade-like “boat processions” (funa gyôretsu), flying colorful banners and playing loud processional music which attracted a great many onlookers. Most daimyô avoided water travel as much as possible during their sankin kôtai journeys, especially towards the mid- and late Edo period, but it seems likely that some at least traveled the river in a similar fashion.

The river changed course slightly, and/or flooded over, numerous times in history. Records of efforts to control the floods go all the way back to the Nihon shoki, which relates that the legendary Emperor Nintoku oversaw the construction of an embankment or earthenworks called manda no tsutsumi in order to guard against flooding of the river. Countless other projects were undertaken throughout the ancient, medieval, and early modern periods. By the Meiji period, many families in villages along the river kept small riverboats ready in their sheds. Many communities also built stone walls along the banks to hold the river in and protect against flooding. The river flooded significantly in 1868, and with the guidance of Dutch engineers, authorities began major riparian construction projects with the aim of guarding against future floods. The river flooded again significantly in 1885, 1896, and 1917, as well as on some number of other occasions in the 20th century. The Yodo, like most rivers in Japan today, is today reinforced along its banks and riverbed with concrete, the latest effort to guard against erosion which would cause changes in the river’s behavior.