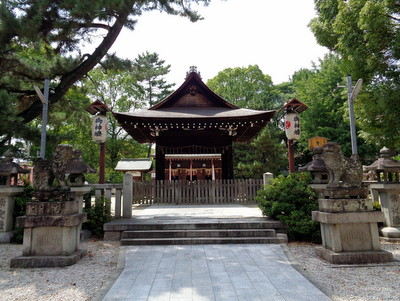 Yodo Shrine is a Shinto shrine near the former site of Yodo castle, in what is today part of Fushimi-ku, Kyoto City. The shrine was long associated with guardian deities for safe transportation along the nearby Katsuragawa river.

According to local legend, the shrine was established in the early 640s by a monk named Senkannaigu, who transferred the deity Yodo daimyôjin from a shrine in Kawakami village, Hizen province (today, Saga prefecture).

The shrine was relocated to its current site in 1900 in conjunction with riverworks projects undertaken at the time.

The haiden (worship hall) dates to 1607 and has been designated an Important Cultural Property. The site includes a number of other small shrine buildings dedicated to various deities.