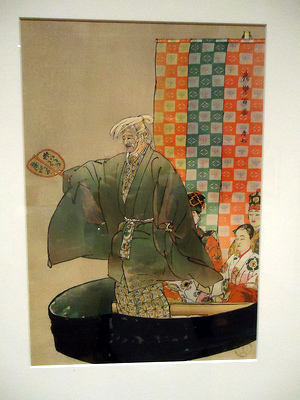 A woodblock print of the climactic scene of the play, by Tsukioka Kôgyô

This is about the Noh play. For Chinese trading ships, see Chinese in Nagasaki.

Tôsen (lit. "Chinese ship") is a Noh play about a Chinese man torn between his Chinese and Japanese families.

The man, after being captured by samurai forces, is kept as a prisoner by a Japanese lord for some thirteen years. During his captivity, he marries a Japanese woman and has two children in Japan. However, his two sons then come from China to rescue him, and he is torn between returning to China, or remaining with his Japanese family. In the end, he joyously returns home to China with his entire family.