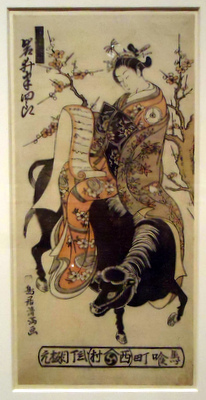 A woodblock print by Kiyomitsu, depicting Iwai Hanshirô as a courtesan seated on an ox

Torii Kiyomitsu was an ukiyo-e artist of the Torii school who worked chiefly in the period when benizuri-e ("rose prints") were at their height, from 1740-1764, before the advent of full-color nishiki-e prints. He has been described as the "nominal head of the third generation of the Torii" school and as the "final major figure in the traditional Torii School"[1].

He was the son of Torii Kiyomasu II, and specialized in images of beautiful young girls, and of kabuki actors.

Some of his works represent the peak of the benizuri-e mode, which, despite the name, often incorporated as many as five different colors. Nevertheless, the techniques involved in producing these colorful images was nevertheless markedly different from the full-color nishiki-e method which would be pioneered by Suzuki Harunobu in 1765.