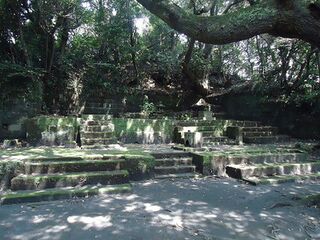 A portion of the ruins of the castle

Tôfukuji castle was a medieval fortress in Kagoshima, the first to be built in Satsuma, Ôsumi, or Hyûga provinces. Taken in 1341 by Shimazu Sadahisa, its former site now constitutes Kagoshima's Taga-yama Park.

The fortress was originally established in 1053 by Haseba Nagasumi, a great-grandson of Fujiwara no Sumitomo, on a hill near the mouth of the Inari-gawa (Inari River). The Haseba clan also established a branch of Kasuga Shrine at the docks nearby.

Shimazu Sadahisa led forces including members of the Nejime clan, in support of the Northern Court, against the castle, a stronghold of the Yagami clan, Southern Court supporters. The castle fell to Sadahisa's forces in 1341. Though the Shimazu had ruled over the area for some time, this represented their first entry into (the area which is today the city of) Kagoshima.

The castle was then attacked in 1347 by naval forces from Kii province, Shikoku, and the Chûgoku region, but Sadahisa managed to repel them. As fighting between supporters of the Northern and Southern Courts continued, Sadahisa named his son Shimazu Ujihisa castellan of Tôfukuji.

Ujihisa's son Shimazu Motohisa felt Tôfukuji castle was too small or cramped, and built a new fortress, Shimizu castle, on the neighboring mountain, as well as a yakata (fortified mansion) at the base of the mountain, making this the new seat of the Shimazu clan. The Shimazu later relocated to Tsurumaru castle (aka Kagoshima castle), but Tôfukuji marked the beginning of Shimazu residence in Kagoshima; the city would remain the Shimazu seat for the next five hundred years.