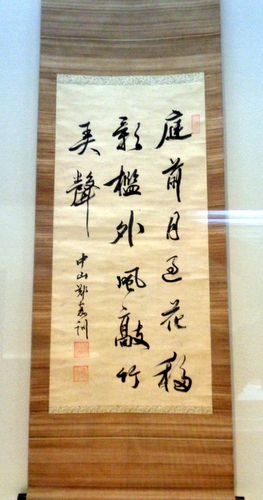 A work of calligraphy by Kakun, donated to the Okinawa Prefectural Museum by the Kamiyama family, into which Shô Yaeko, the fifth daughter of King Shô Tai, had married

Tei Kakun, also known by his Ryukyuan-style name Kohagura Jihô, was a prominent Ryukyuan calligrapher of the 18th-19th centuries. He was the 16th head of the Tei family, which traced its descent from the 14th century Chinese immigrant Tei Gisai.

He was born in Kumemura, and at 25 was appointed assistant to the kanjihô. He traveled to Fuzhou as a student in 1796, and would later travel to China three more times, as a member of tribute missions, including once as vice envoy (seigi daifu) in 1808. He also served as the gieisei (head of street musicians) on a Ryukyuan embassy to Edo in 1806.[1] Later on, for a year and a half[1] from 1816 onward, he was ordered by the lord of Satsuma han to travel to Kagoshima, to teach calligraphy.

At age 58, he achieved the highest post in Kumemura, that of sôri tôeishi. A number of works by Kakun survive today.

His eldest son Tei Genkin is known for teaching calligraphy to the gakudôji who traveled to Edo in 1842, while Kakun's second son, Tei Gen'i, also became a noted calligrapher.[2]