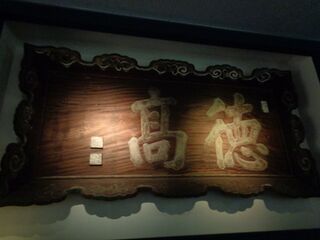 Tei Gen'i was a prominent Ryukyuan calligrapher of the early 19th century.

He was the second son of celebrated calligrapher Tei Kakun, and was adopted into the main branch Ômine family. Appointed jitô of Kogusuku Village in Oroku magiri, he gained the title Kogusuku ueekata. He later served as gieisei (head of street musicians) on the 1842 Ryukyuan mission to Edo.[1]

Surviving works by Tei Gen'i include several considered to be exceptional examples of regular script (kaisho).[2] Among his extant works is a large wooden plaque, in the collection of the Okinawa Prefectural Museum, reading 「高徳」 (kôtoku, lit. "high virtue"). Dated 1852, the plaque was commissioned by Satsuma han and given to Dazaifu Tenmangû as a gift on the occasion of the 950th anniversary of the shrine's founding. The plaque was returned to Ryûkyû in 1968.[3]