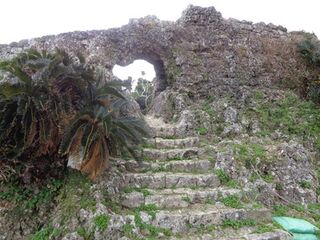 One of the main gates at Tamagusuku gusuku. On certain days of the year, the gate lines up with the sunrise, an intentional choice related to tedako sun worship.

Tamagusuku castle was a fortress located on the Chinen Peninsula in the southern part of Okinawa Island, between Itokazu gusuku less than a kilometer to the west, and Kakinohana gusuku to the east.

It is unclear when Tamagusuku gusuku was first built, but it is believed to have been restored and expanded during the reign of King Eiso (r. c. 1260-1299). The Chûzan seikan relates that the gusuku was built by Amamikyo, the creator god of Okinawan myth, though given the varied meanings of the word gusuku, this may refer to the creation of the site as a site of sacred power, and not to the creation of the fortress. The site is considered one of the seven major utaki, or sacred sites, on the island, and is referred to in the Omoro sôshi as a "gusuku of the gods." It was the site of prayers for rain and New Year's rituals for a good harvest; the kikoe-ogimi, or High Priestess, would come here directly and specifically once every two years to perform certain rituals.

The fortress consists of three enclosures, the highest one about 180 meters above sea level. The site was protected to the northwest by the drop of the cliff, and to the east by the high stone walls of the second and third enclosures. Much of the stone from these two enclosures was later taken from the site by US military to be used as construction materials, and so more or less all that remains today is the foundation stones.

A gate in the highest enclosure is carved out of the natural rock into the shape of a magatama, and has become the symbol of the castle. Four sacred sites are located within the enclosure. The walls of the first enclosure, which remain intact, are constructed in a mixture of cut stone and uncut stone styles. They are 5-6 meters tall at the tallest point, and as much as six meters thick at the thickest points.