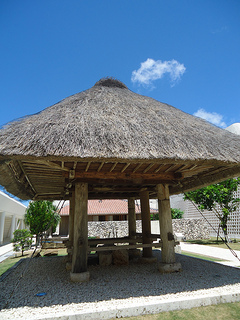 A 20th century takakura storehouse from Okinoerabu Island, on display today at the Okinawa Prefectural Museum

For the monarch, see Emperor Takakura

A takakura (lit. "tall/high storehouse") is a style of elevated storehouse, common throughout the Japanese archipelago in prehistoric and early historic times, and used in the Ryûkyû Islands into the 20th century. Similar structures are seen in Indonesia, and elsewhere throughout the Southeast and East Asian region. In the Ryukyus, such storehouses were used not only to store rice and other grains, but also various seeds and nuts, as well as brown sugar, and salt-preserved meats.[1]

A Ryukyuan or Amami Islands storehouse is typically comprised of a single storage space with an extensive thatched or bamboo roof, elevated off the ground on a series of four, six, or nine wooden pillars. The use of round pillars is a particular characteristic of Amami/Ryûkyû-style storehouses.[1] The elevation allows breezes to pass underneath the building, protecting the goods stored inside from humidity; the ladder used for access can be taken away, helping prevent rats and other vermin from getting into the storehouse. Floorboards of particular woods were also used to deter pests. The walls of the storehouse slope out as they go up higher, creating a somewhat diamond-like shape to the building overall. In contrast, a style of granary exclusive to Hateruma Island uses straight vertical walls, and thus more closely resembles a normal house; these are elevated a shorter distance above the ground as compared to those on other islands.

People often used the space beneath a storehouse to store tools and equipment, as a gathering and meeting place, or as a place for children to play.

In earlier periods, storehouses were typically located on the outskirts of the village, in groups known as burigura (郡倉); in later eras, it became more and more common for families to have individual storehouses, located within the village, immediately next to their homes.[2]

An example at the Okinawa Prefectural Museum, dating to the Shôwa period (1926-1989) and originally built on Okinoerabu Island, is 6.45 meters in total height, elevated on six pillars separated by 3.16 meters in one direction, and 2.35 meters in the other direction, covering a total of 7.4 square meters, and able to store sixty paddy bags (hyô). Takakura with four, six, seven, or as many as nine pillars can also be found.[1]