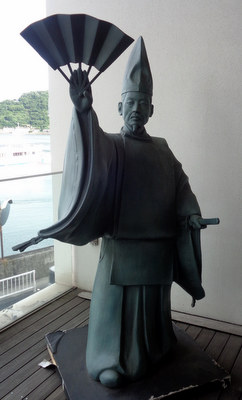 Taira no Kiyomori was the head of the Taira clan in the 1150s until his death in 1181, and an extremely influential and powerful figure at Court for much of that period. Following in the footsteps of the Fujiwara clan, he came to dominate court politics, both through political marriages and other means, becoming the de facto ruler of the State for over two decades, suppressing the power of the Retired Emperors, and having reigning emperors as, essentially, puppet rulers. His rise to power marks the beginning of the rise of samurai power, and the end of direct Imperial rule; his fall, or, rather, that of his clan, is the chief theme of the great epic The Tale of the Heike (Heike monogatari).

Kiyomori was the son of Taira no Tadamori and grandson of Taira no Masamori, who served as "close retainers" (kinshin) within the "cloistered court" (in-no-chô) of Retired Emperors Shirakawa and Toba. As a result, even from the young age of 12, Kiyomori already began to receive special preference in court rank and official positions.

Along Minamoto no Yoshitomo, he led Emperor Go-Shirakawa's forces to victory in the Hôgen Disturbance of 1156, and then led the Taira clan to victory again in 1159, crushing Yoshitomo, who had become his rival for power, in the Heiji Disturbance. Through both of these victories, Kiyomori gained and then secured considerable power, becoming one of the "senior nobles" (kugyô) by 1160, and daijô daijin ("Chancellor of the Realm") in 1167, flying up through the ranks without even passing through the positions of Minister of the Left and of the Right (Sadaijin and Udaijin).

He further secured his elite position by marrying the sister of Kenshunmon-in, a favored consort of Emperor Go-Shirakawa; this also made him uncle (by marriage) to Emperor Takakura. One of Kiyomori's daughters, who would later be known as Kenreimon-in, became a consort to Takakura, while other daughters of Kiyomori were married to prominent members of the Fujiwara clan.

Kiyomori is also associated with a number of prominent religious and cultural establishments. After becoming governor of Aki province, he oversaw the reconstruction of Itsukushima Shrine; the shrine would continue to bear a connection to the Taira clan down through the centuries, and holds in its collections a precious set of sutras formerly owned by, or penned by, Kiyomori and his relatives, known as the Heike Nôkyô. Kiyomori was also involved in the construction of the Sanjûsangendô in Kyoto, which was completed in 1164.

Kiyomori fell ill in 1168 and formally retired from official service; he took the tonsure, becoming a lay-monk and taking the name Jôkai. He retained considerable power and influence, however.

A small group plotted to overthrow Kiyomori in 1177, in what has come to be called the Shishigatani Incident. Their plot was discovered before it was even attempted, however, and those involved were either executed or exiled.

Following Emperor Takakura's abdication in 1180, Kiyomori's two-year-old grandson took the throne as Emperor Antoku. A few months later, Kiyomori arranged to have the imperial capital moved to Fukuhara, a move meant to increase his power & influence even further. The move did not last long, however, and Heian (Kyoto) became the capital once more before the year was up. The Genpei War broke out that same year, as Imperial Prince Mochihito issued a call-to-arms, requesting aid from the Minamoto clan to support his claim to the throne. In the last month of 1180, Kiyomori sent a small force to Nara, led by his son Taira no Shigehira, to broker some kind of peace with the monks of Tôdai-ji and Kôfuku-ji, who had opposed him; the monks resisted violently, and the ensuing battle resulted in the destruction of both temples.

Kiyomori died the following year, leaving his sons and grandsons to lead the clan in the war against the Minamoto.

Numerous monuments, memorials, and historical markers associated with Kiyomori can be found across Japan. Some areas, such as the Ondo neighborhood within Kure City, Hiroshima prefecture, honor Kiyomori with annual festivals. The Ondo Kiyomori Matsuri celebrates his construction efforts in the Inland Sea, and though it originated in nenbutsu odori dances meant to appease the spirit of Kiyomori, the festival eventually came to incorporate a reenactment of an Edo period sankin kôtai daimyô procession as well.[1]