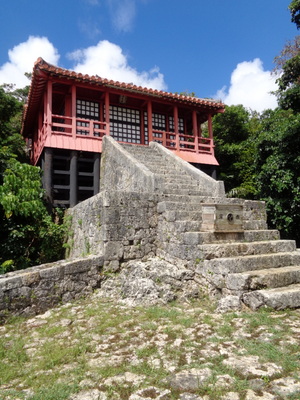 Sueyoshi Shrine is a Kumano Gongen Shinto shrine located in Sueyoshi Park in Naha, on Okinawa Island. It is considered one of the Ryukyu Eight Shrines. It is paired with the no-longer-extant Buddhist temple, Henshô-ji (also known as Manju-ji).

The shrine was originally established sometime in the mid-Muromachi period. Major repairs were undertaken at Sueyoshi in 1803. The shrine was named a National Treasure in 1936, but suffered considerable damage in the 1945 Battle of Okinawa and was then dismantled as a result. The current structure dates to 1972, rebuilt in part using surviving elements from the pre-1945 structure.