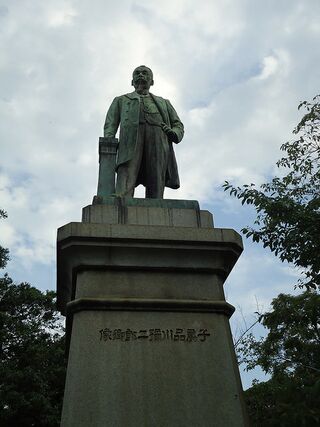 An inscription on the back of the stone base reads "Field Marshal Admiral Marquis Saigô Tsugumichi and 2845 others. August, 1907. Director Takamura Kôun, Producer Motoyama Hakuun, Casting Hiratsuka Komajirô."[1]

Born into a samurai family in Chôshû, he joined the sonnô jôi movement and began studying under Yoshida Shôin at the Shoka sonjuku in 1857. In 1862/12, Shinagawa was involved in the destruction of the British legation in Yokohama.

During the Boshin War, Shinagawa served as a staff officer for the Governor-General of the Pacification of the North (奥羽鎮撫総督), and for the Seimutai.

Following the Meiji Restoration, Shinagawa spent some time studying in Europe, beginning in 1870. Returning to Japan, he then served in a number of top-level government positions, including Junior Vice Minister of the Home Ministry (Naimu shôfu), Senior Vice Minister of Agriculture and Commerce, resident ambassador to Germany, court councillor, and Privy Council, before becoming Minister of Home Affairs in 1891.

Shinagawa retired from government service after facing considerable interference from anti-government groups, but founded his own political party, the Kokumin Kyôkai (lit. "Citizens Association") and became its vice-president. Shinagawa is also credited with writing the words to the popular Meiji period loyalist song "Tokoton-yare bushi."