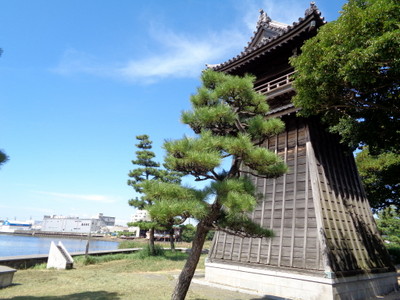 Shichiri no watashi ("seven ri crossing") was a ferryboat crossing along the Tôkaidô highway, connecting Kuwana-juku to the west with Miya-juku (Nagoya castle-town) to the east across the northernmost tip of Ise Bay.

Despite the short distance, crossing only the narrow tip of Ise Bay, the distance of seven ri being a tiny fraction of the distance across the bay at its widest points, this was nevertheless a dangerous crossing. In 1671/9, a Ryukyuan embassy on its way back from Edo encountered a storm on the bay and was scattered; amazingly, no one was killed, but members of the embassy drifted to a number of villages around the bay and it took some time, effort, and resources to get them all back together. Though the 1710 embassy used this ferry crossing again, all other Ryukyuan embassies (in 1682 and from 1714 onward) avoided the danger by taking the Mino Road, a northerly inland route, rather than the Tôkaidô water crossing.[1] At times, certain elite travelers such as shoguns and emperors took an even shorter ferry crossing, known as the Saya kaidô, also in order to avoid the danger of the Shichiri-no-watashi crossing.[2]

The ferryboat landing at the eastern, Nagoya, end of the crossing was considered the "gateway to Nagoya," and was one of the primary sites through which people and goods came into the castle-town from Osaka and Kyoto to the west or from Edo to the east. Nagoya han established a guardhouse (funabansho, to the west of the hama torii), trading houses (funa kaisho), and the like near the landing, as well as small "eastern" and "western bayside mansions" (higashi and nishi hama goten) for the Owari Tokugawa clan lords of the domain. The two honjin of Miya-juku were a short distance away, and the streets nearby were lined with hatagoya, funayado, and other types of inns for travelers.[3]