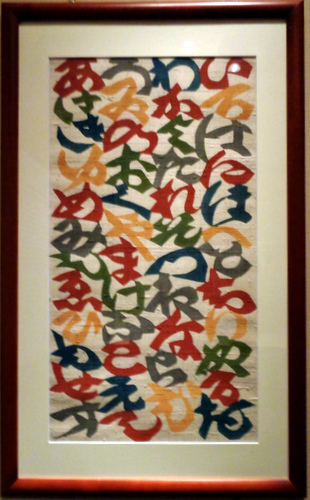 Serizawa Keisuke was a textile designer and a prominent member of the Mingei ("folk craft") movement in prewar Japan.

Born in Shizuoka prefecture in 1895, Serizawa graduated from the design section of Tokyo Engineering High School. While traveling in Korea in 1927, he read Yanagi Sôetsu's book Kôgei no michi ("The Way of Craft"), and by the following year had become deeply interested in textile dyeing, and in the Okinawan art of bingata in particular. Serizawa began writing for Yanagi's magazine Kôgei ("Craft") almost immediately after its establishment in 1931, and became closely involved in the Mingei movement. He also joined Yanagi on at least one trip to Okinawa, sometime in the late 1930s or early 1940s.

He enjoyed a lengthy postwar career, continuing to produce designs for textiles, as well as two-dimensional works with his own distinctive personal style.