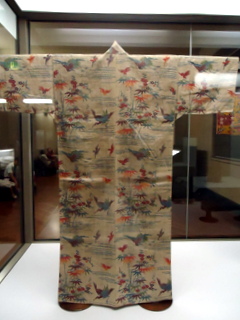 A bingata robe on display at the Tokyo National Museum 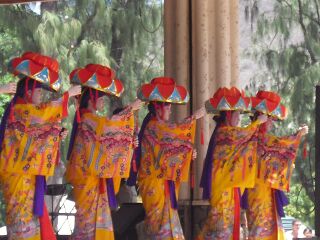 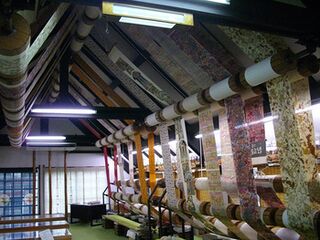 Bolts of cloth being hand-dyed at a workshop in Shuri

Bingata is an Okinawan resist-dye textile design technique, involving bold, colorful patterns, often involving flowers, and often on a red or yellow ground. Traditionally, bingata garments were strictly limited to the Ryukyuan royalty and aristocracy. Yanagi Sôetsu began promoting bingata as folk craft (mingei) in 1938, however, praising it alongside other Okinawan and Korean arts as a quaint, exotic, art produced by anonymous folk weavers and evocative of a simpler time; as a result, bingata's aristocratic associations have been all but lost today in the popular consciousness.[1]

Bingata techniques and styles as known and celebrated today are said to have reached their mature phase by the end of the 17th century; though various dyeing techniques and styles existed in Ryûkyû prior to that time, it was only in the early modern period that the particular techniques and styles today associated with "bingata" developed. The term bingata, meanwhile, only became widely used in the late 19th or early 20th century; prior to that, the term katatikii (J: katachiki), roughly meaning "applying designs," was the term most commonly used in Ryûkyû.[2] Huā bù, or "floral cloth," was often used in Chinese-language sources referring to the Ryukyuan product.[3]

Roughly 41 bingata garments associated with the royal family survive today,[4] including several which have been designated National Treasures. They are defined as bingata by the dyeing technique, and include garments made from a variety of materials.

The Ryukyuan aristocracy did not wear bingata during major court ceremonies, but only for comparatively everyday situations, and regular court events.[5] They were worn mostly by adult women, and by young people both male & female; adult men generally only wore bingata when wearing it as a costume for dance or theater.[6]

As in traditional Chinese/Confucian belief, the color yellow was associated (out of the five cardinal directions) with the Center, and with the Emperor - or, in the case of Ryûkyû, with the king. Yellow garments, dyed using an arsenic sulfide known today as orpiment, or other plant or mineral dyes, were thus worn only by members of the royal family.[7]

Sumptuary regulations restricted the wearing of bingata were loosened at some point in the early modern period, and commoners were permitted to own and wear such garments. However, they remained extremely expensive; only the wealthiest of commoners managed to obtain bingata robes, and they generally wore them only on special occasions.[5]

The process is done by using persimmon juice as a resist, blocking out areas one does not wish to dye. Dye is then applied through stencils, by hand, one section at a time, to produce the designs.[8] The stencils are made from soft, thick hôsho paper which has been strengthened with persimmon juice. More than 2,000 such stencils survive from prior to World War II, and each is inscribed with the year, the names of the studio (紺屋, kôya) and client, and other information. Each kôya maintained its own collection of stencils, and passed them down through the generations. The oldest surviving stencils today date to 1796.[3] The stencils were cut out on a dried tofu base known as a rukuju using a small chisel known as a shiigu. Some are negative designs (O: shiruzigata) in which the background was cut away, leaving the pattern, while others are positive designs (O: somezigata) in which the pattern is cut away, leaving the background.[9] The cutting and production otherwise of the stencils, dyeing the fabric, and other aspects of bingata production were all performed within the same studio.[10]

Fabric to be dyed is laid out on a long narrow board. The stencils are placed atop it, and then a spatula is used to spread a resist paste (J: nori 糊) made of glutinous rice, rice bran, salt, water, and lime over the fabric, through the stencil. This is then repeated, typically with the same stencil being placed again and again repeating across the length of the cloth. Gojiru liquid made from ground soybeans is then applied as a sizing, allowing the cloth to accept the pigment in a more advantageous way. Finally, the dyer applies mineral pigments mixed with gojiru directly to the cloth in the desired locations with a short stubby brush. Pigments are sometimes applied in multiple layers, to produce more intense colors, shading, or outlines. A solution of alum is then used to fix the colors, before the resist-paste is washed off, leaving an undyed background ready to be dyed. Resist paste is then applied carefully over the birds, flowers, and other colored designs, leaving just the background exposed; the background colors are then applied with a brush. Alum is applied again to fix the colors, and the resist is finally washed off again.[9]

Some have suggested that bingata technique and styles first emerged due in large part to the influence of Japanese dyed fabrics which were brought into the Ryukyuan royal court as gifts from the Tokugawa shogunate. By the 19th century, if not earlier, bingata garments began to show the influence, too, of the latest Japanese commoner fashions; for example, motifs of flowered roundels appear both in Okinawa and in Kyoto, Osaka, and Edo around the same time.[12]

While particular 19th century design motifs may have been the product of Japanese influences, however, the Ryukyuan tradition of stencil dyeing goes back to the 14th or 15th century, and was introduced through the islands' maritime interconnections with Southeast Asia. The oldest fabric fragment considered "bingata" today has been tentatively dated to the 15th century. Techniques from southern India or Indonesia (batik) may have informed the development of the Ryukyuan use of resist paste. Textile historian Buyun Chen writes that it is the distinctive combination of resist paste and stencils that sets bingata apart as a distinctive form.[13]

In the early modern period, up until the fall of the kingdom in the 1870s, three lineages dominated the formal production of bingata for the royal court: the Takushi, Gusukuma (now known as Shiroma), and Chinen families. Members of the Shiroma and Chinen families remain today leaders in maintaining and promoting the tradition.

Takushi Jino was a young up-and-coming craftsman in the royal court when it was abolished in the 1870s; in the 1920s, at the age of 61, he was interviewed by scholar Kamakura Yoshitarô, providing one significant portion of Kamakura's defining prewar study on bingata. Sadly, by the 1920s, Takushi had unbound family records on dyeing techniques and had used the pages in wall screens, an indication of just how far traditional craft had fallen from its place of importance.[14]

Shiroma Eiki and Chinen Sekihiro, descendants of court craftsmen, led a revival of bingata during the post-WWII Occupation period, with the support of the American Occupation authorities, who sought to patronize and promote Ryukyuan culture.[3] They and/or their successors have been named Living National Treasures or otherwise formally recognized as "holders" of this cultural tradition.