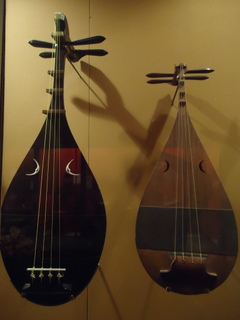 Satsuma biwa is a style or genre of narrative storytelling in which the storyteller accompanies him or herself on a lute-like musical instrument called a biwa.

The style is based on the Heike biwa tradition, but uses a larger biwa, which is said to produce a more dramatic sound. It emerged in Satsuma province in the 16th century, and Shimazu Tadayoshi (1493-1568) had a particularly strong connection with the instrument. He is said to have composed the piece Hôraizan.

Satsuma biwa performance originally focused on a repertoire of stories aimed at the moral or educational edification of young men, women, and the elderly. However, in the Edo period, several different schools of Satsuma biwa developed. While the samurai style added military tales and other dramatic pieces, "town" (machi) and "troupe head" (zatô) schools developed along different lines.

Satsuma biwa enjoyed a revival in the Meiji period, as some of the most prominent figures in the Meiji government were from Satsuma, and introduced the school into Tokyo, and elsewhere. The Meiji Emperor, too, is said to have enjoyed Satsuma biwa music.