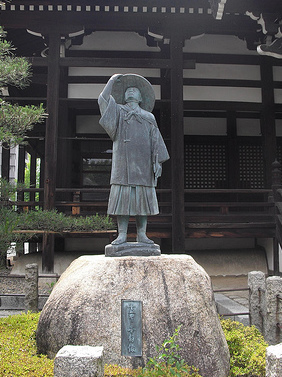 A statue of Samyeongdang stands today at Honpô-ji, a temple in Kyoto where he stayed for several months in 1604-1605.

Samyeongdang was a Korean monk who served as the first Korean envoy to the Tokugawa shogunate.

He had fought alongside other Korean warrior monks to repel Toyotomi Hideyoshi's invasions of Korea in the 1590s; hearing of the change of power in Japan as Tokugawa Ieyasu was named shogun in 1603, the Korean court sent Samyeongdang to Japan the following year to determine Ieyasu's attitudes and intentions regarding Korea. According to some sources, it is quite possible that the court did not intend for him to go beyond Tsushima, as he did not bring with him any formal letters of state or other communications addressed to the shogun or the shogunate, but only letters addressed to Sô Yoshitoshi, daimyô of Tsushima. Thus, though Samyeongdang did end up being the first Korean envoy to meet with a Tokugawa shogun, he is not generally considered the first formal or official envoy.[1]

Samyeongdang, along with envoy Son Munik (孫文彧) and their Korean entourage arrived in Kyoto in the 12th month of 1604, along with Sô Yoshitoshi and his entourage. The Koreans stayed at the Kyoto temple of Honpô-ji for a time, waiting for the opportunity to meet with the shogun or his officials. In the meantime, they were visited by monks from some of Kyoto's major temples, with whom they exchanged poems and engaged in other such activities.

Samyeongdang was granted an audience with Shogun Tokugawa Ieyasu and his son Hidetada in the 3rd month of the following year (1605), at Fushimi Castle, where they met as well with Honda Masanobu and Zen monk Saishô Shôtai, the chief foreign advisors to the shogun. After determining that Ieyasu had no hostile intentions towards Korea, and engaging in other negotiations towards reconciliation between the two countries, including arranging for the return of over 3000 Korean prisoners of war from Japan, the monk returned home. Formal letters were exchanged between the courts, and after further negotiations, the first official tongsinsa mission was sent to Japan in 1607, beginning a pattern of regular relations between Korea and Japan which would last throughout much of the Edo period.