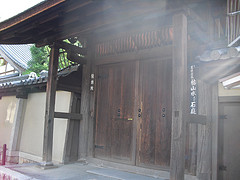 Ryôgen-in is a sub-temple of Daitokuji, founded in 1502 by Hatakeyama Yoshimoto, lord of Noto, Ôtomo Yoshinaga of Bungo, and a number of others. It is famous for its abbot's quarters (hôjô), the oldest building in Daitokuji; and for its possession of a Tanegashima gun inscribed with the year 1583, and a go board which it is said was used in a game between Toyotomi Hideyoshi and Tokugawa Ieyasu.

The head temple of the Southern School of Daitokuji Zen, the temple was formally founded by the 72nd abbot of Daitokuji, Tôkei Sôboku.

The original abbot's quarters, Omotemon gate, and genkan are still extant, and have been designated Important Cultural Properties. The abbot's quarters is celebrated as a classic example of Zen architecture.

The grounds contain three gardens, including ones meant to resemble or recall the ocean in white sand, or Mt. Hôrai with cranes and turtles. One, called Tôtekiko, is said to be the smallest rock garden in Japan; the pattern of the stones there is meant to resemble the ripples in the ocean from a single drop of water.

The temple also contains one of the foundation stones from Hideyoshi's Jurakudai mansion.