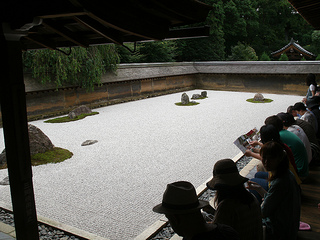 The famous rock garden at Ryôan-ji

Ryôan-ji is a Buddhist temple of the Myôshin-ji branch of Rinzai Zen, located in northwestern Kyoto, and famous for its Zen rock garden. It is considered a UNESCO World Heritage Site alongside a number of other temples and historical structures, as the group site "Historic Monuments of Ancient Kyoto (Kyoto, Uji and Otsu Cities)."

The temple was originally the site of a mansion belonging to the Tokudaiji clan, but was obtained in 1450 by Hosokawa Katsumoto, who converted it into a site for training Zen monks. The temple was destroyed in the Ônin War (1467-1477), but was rebuilt in 1499, and expanded a century later by Toyotomi Hideyoshi and Tokugawa Ieyasu. At its peak, the temple boasted over 23 sub-temples.

The rock garden at the hôjô (abbot's hall) is perhaps the most famous of all Zen rock gardens. Its fifteen stones cannot be seen all at once from any vantage point, and are said to resemble or represent any number of possibilities.

The extensive grounds include, among many other structures, the mausoleum of Emperor Go-Reizei (r. 1045-1068), and a cenotaph erected in 1970 in memory of the abbot's comrades who died in battle in Burma in World War II.