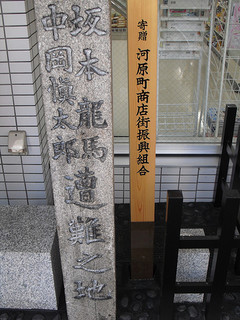 Stele marking the former site of the Ômiya.

The Ômiya was a soy sauce shop in Kyoto where, on 1867/11/15, Sakamoto Ryôma and Nakaoka Shintarô were killed by pro-bakufu forces. Ryôma died that night, while Nakaoka died of his wounds two nights later.

Sakamoto Ryôma, an anti-shogunate activist, had been renting a room at the shop; Nakaoka, head of another anti-shogunate organization, came to visit him, and to discuss the possibility of restoring the Emperor to power.

The details of precisely when and how they were attacked, and by whom, remain one of the most popularly debated mysteries in Japanese history.