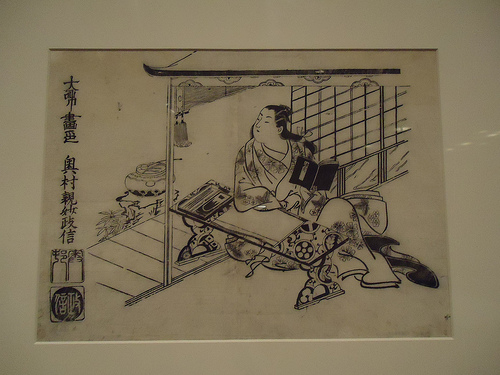 Okumura Masanobu was an early ukiyo-e artist, whose career spanned the time from the early monochrome prints, marked by particularly expressive and bold black outlines, to just before the advent of nishiki-e full-color printing. He produced works in a wide variety of formats, from tall pillar prints to triptychs, and experimented more than perhaps any other ukiyo-e artist with a wide range of subjects or themes, including Buddhist subjects, landscapes, and birds and flowers. He also experimented with reversed prints, which use white outlines and black background, a form often compared to stone rubbings and called, in fact, ishizuri-e ("stone-rubbing prints").

Believed to have been most likely largely self-taught, Masanobu's early work took inspiration from that of Torii Kiyonobu but was distinct and individual. His earliest extant work, referred to as (the) Courtesan Album, was published in 1701. In the years following, among many other works, Masanobu produced a number of albums and illustrated books parodying classic Chinese tales, the Genji monogatari, and stories from Noh and kabuki plays.

In the 1720s, Masanobu established his own publishing house, allowing him greater control over the final products of his work, and a greater share of profits. He would later pass on management of the operation to his son, Okumura Genroku, so as to enjoy more time in which to focus upon the actual task of producing print designs. Sumptuary laws imposed by the government at this time helped sway trends towards smaller prints, and towards the urushi-e ("lacquer print") style, the tan-e (orange hand-colored print) form declining in popularity; Masanobu followed the trends, focusing his production on urushi-e style prints on smaller slips of paper at this time. The use of urushi-e style to depict kabuki actors was a particularly striking move, differing as it did from the style of the Torii school, who dominated actor prints at that time, and throughout much of the Edo period, and providing an intriguing contrast.

Larger prints returned to popularity in the 1740s, with Okumura at the crest of the wave. He continued to produce smaller works at this time as well, but turned his attention once more to larger depictions of standing beauties and actors, particularly in a form known as kakemono prints, meant to be mounted into scrolls or otherwise hung on a wall for display; he produced a number of hashira-e ("pillar prints") at this time as well, considerably taller than they are wide.

Masanobu also pioneered experiments with Western perspective, producing a number of prints of the interiors of kabuki theatres and shops, and other architectural subjects which allowed for clean and direct application of the principles of one-point perspective. These were seen chiefly as novelties, however, in Japan at this time, and did not represent the beginning of an artistic revolution by any means. In fact, it would not be until over a century later, with the true coming of "modern/Western art" in the form of yôga in the Meiji period that Western artistic styles, methods and modes would be fully embraced by Japanese artists.

His early career, up until the 1730s, is marked chiefly by the production of numerous monochrome print albums, but in the successive decades, he turned his attention more to single-sheet prints, and to paintings.