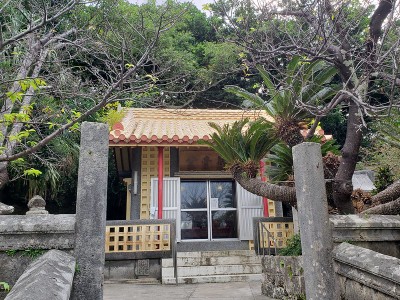 The temple claims origins in the 17th or 18th century when the crew or passengers of a Chinese ship became castaway on Ôjima and were helped by the local people. A woman in white (either the bodhisattva Kannon or some other deity) is said to have appeared and to have guided the Chinese castaways. Ultimately, a worship site of some sort was established in connection with this event, praying for safe ocean voyages, for successful & prosperous fishing, and for the prosperity, peace, and well-being of the island. Then, when the Chinese ship was repaired and the castaways were able to set sail for home, they are said to have suggested or proposed the establishment of a Buddhist temple there, in thanks and in prayer for the deities who helped them.

After returning home, the Chinese sailors had a golden Kannon statue sent to Ryûkyû to be installed on Ôjima. After some confusion - plaques at the temple tell that the statue was initially sent to the wrong Ôjima - the statue was eventually brought to the correct Ôjima, and a small temple was built for it.

The temple has since been restored or rebuilt three times, though records of the dates or circumstances are scarce. The golden Kannon statue, similarly, is believed to have survived perhaps until World War II, but the temple today houses a ceramic one. Stone lanterns on the site are said to date to 1812, donated by a group of scholar-aristocrat elites; the stone torii gate and the temple structure itself are modern constructions, however, dating to the 1960s.