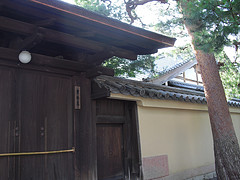 The front gate to Ôbai-in. The temple is not normally open to visitors.

Ôbai-in is a subtemple (tatchû) of Daitokuji in Kyoto. It was founded by Hashiba Hideyoshi on the orders of Oda Nobunaga, to serve as a site for the memorial services for Nobunaga's father Oda Nobuhide. A number of major historical figures, chiefly members of the Oda and Môri clans, are buried there; the temple is also famous for its associations with Sen no Rikyû and Unkoku Tôgan, and for having possibly the oldest living quarters (kuri) of any Zen temple in Japan.

After the temple's foundation in 1562 as Ôbai-an (黄梅庵), the main hall and karamon gate of the temple were renovated by Hideyoshi in 1586. Kobayakawa Takakage oversaw renovations of two other gates of the temple three years later. The temple took the name Ôbaiin ("Golden Plum Blossoms Hall") that year (1589). It was formally founded by Shunrin Sôshuku Ôshô, 92nd chief abbot of Daitokuji.[1]

After Nobunaga's death in the 1582 Incident at Honnôji, a private funeral was held for him here.[1]

A fusuma painting prominent in the main hall, depicting the Seven Sages of the Bamboo Grove, and designated as an Important Cultural Property, was painted by Unkoku Tôgan. The temple also has a bronze bell and stone lantern said to have been brought there from Korea by Katô Kiyomasa.[1]

The temple's graveyard includes the resting places of Oda Nobuhide, Kobayakawa Takakage, Gamô Ujisato, Môri Motonari and his wife, three of Motonari's sons, one of Nobunaga's daughters and her husband, and several other members of the Môri family.