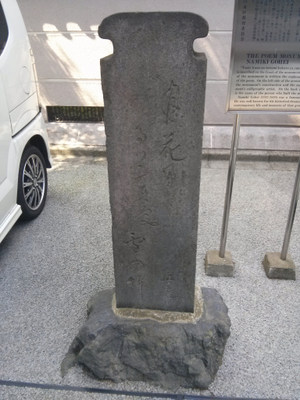 A stele featuring poetry by Namiki Gohei, at Sensô-ji in Asakusa, Tokyo

Namiki Gohei was a prominent kabuki playwright of the Edo period, known for both his jidaimono (historical dramas) and sewamono (contemporary plays). His works include Banzuiin Chôbei and Kinmon gozan no kiri.

Born in Osaka in 1747, he relocated to Edo in 1794, and quickly came to be regarded as one of the two chief playwrights of the time, alongside Sakurada Jisuke I.

Three later playwrights succeeded to the name Namiki Gohei after him.