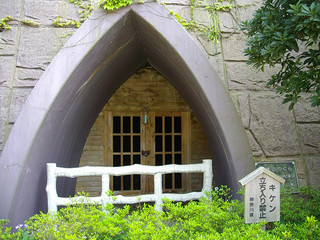 The sealed entrance to the yagura.

Not to be confused with the Momijiyama bunko, the library/archive of the Tokugawa shogunate.

The Momijiyama yagura (storehouse/crypt) was discovered in 1935, including a five-tiered pagoda, enshrined remains (ashes), and the "16 Wells of Kaizôji" (Sea Storehouse Temple). At the time, it was decided that the remains found there belonged to members of the Hôjô clan, or to individuals closely related to the clan. A 1999 investigation confirmed the identification of the Sixteen Wells.

As was common in the Kamakura area during the Kamakura and Muromachi periods, caves were carved into the mountains, used as grave sites for the elite, and called "yagura" (a term which in other contexts refers to storehouses and warehouses, often arsenals, the characters 矢倉 "yagura" literally meaning "arrow storehouse").

The cave was actually used as an air defense shelter during World War II, though in the end, through the efforts of Langdon Warner, Kamakura was spared air raids.

The yagura is located within an area designated as a special historical zone, related to the shogunal regents of the Hôjô clan. In 2001, elements of the NHK Taiga drama "Hôjô Tokimune" were shot there; Tokimune is credited with playing an important role in repelling the Mongol invasions of the 13th century.