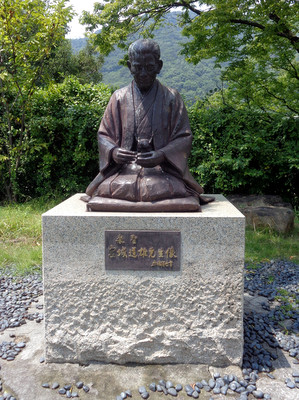 Miyagi Michio was a Meiji period pioneer in the development of a concept of categories or styles of "Japanese music" as a national tradition.

Born in Kobe, the eldest son of Suga Kunijirô, he began losing his sight at age eight, and began practicing koto music. He studied for a time under Nakashima Kengyô II, and then lived for a time in Icheon, Korea, before relocating to Tokyo. There, he began to seek the true essence of "Japanese music," and worked to establish new forms of "national" or "Japanese" music.

Though born and raised in Kobe, Miyagi claimed his father's hometown, Tomonoura, as his own, and composed a number of pieces inspired by that Inland Sea port town in Hiroshima prefecture.