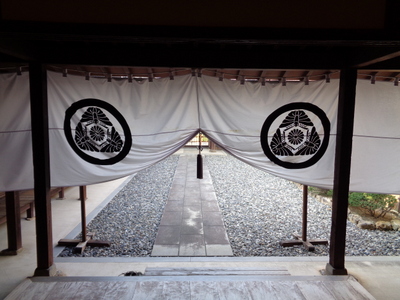 The "three butterflies in a circle around a 16-petal chrysanthemum" 三蝶円内十六葉菊 kamon of the Matsudaira clan lords of Yoshida, emblazoned on curtains hung at Futagawa-juku honjin in Toyohashi, Aichi pref.

Yoshida han was an Edo period domain based at Yoshida castle in Mikawa province.

From 1712 onward it was ruled by Matsudaira Izu-no-kami, a lord who regularly held the title of jijû and the post of rôjû. This branch of the Matsudaira clan claimed descent from Matsudaira Nobutsuna, the first Matsudaira clan lord of Kawagoe han. The first of this lineage to rule at Yoshida was his great-grandson Matsudaira Nobutoki, who was transferred to Yoshida in 1712.