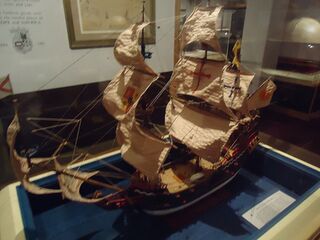 The Manila galleons were Spanish trading ships which ran between Manila, in the Philippines, and Acapulco in New Spain (Mexico), in the 16th-19th centuries. They played a major role in a global trade network bringing East Asian silks, porcelain, tea, spices, and other luxury goods to the Americas & Europe, and bringing Spanish silver (in the form of Mexican silver dollars) to China and Japan.

From 1565 onwards, for about 250 years, these ships traveled annually between Manila and Acapulco, carrying Spanish silver to Asia, where it was traded for silk, tea, spices, Persian rugs, ivory, jade, and the like. Some 40,000-100,000 Asians traveled to New Spain aboard these ships over the course of the period.[1] Many were slaves. All, regardless of whether they came from India, China, Japan, the Philippines, or elsewhere in the region, were called chinos, indios, or indio chinos in Spanish, terms which literally translate to "Chinese," "Indians, and "Indian Chinese" respectively, but which effectively all meant "Asians" or "people of China and/or the Indies."[2]

As with any sea voyage, there was always a risk of storms, shipwreck, or other difficulties or disasters; Manila galleons were blown off course and became shipwrecked in Japan on a number of occasions. One of the more famous such incidents took place in 1596 and is known as the San Felipe Incident. A Spanish ship became shipwrecked on the coast of Tosa province; Toyotomi Hideyoshi divvied up the ship's cargo, with the majority going to himself and to the daimyo of Tosa. It is said that the incident sparked in Hideyoshi a renewed hostility towards Christianity.