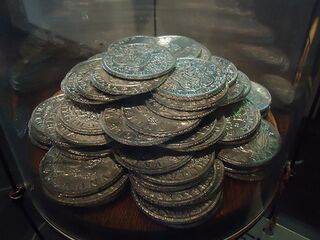 A pile of replica reales de a ocho, on display at the Museum of the Chinese in America

The Spanish dollar, a silver coin worth eight reales and thus also known as "pieces of eight," was a prominent form of currency throughout the East Asia region, and beyond, in the early modern period.

They were first minted in 1536, and quickly became a global standard, because of their rather reliably standard weight and purity. Largely minted using silver from South American mines such as Potosi, Spanish coins traveled to East Asia in massive volumes aboard the Acapulco-Manila galleons. They soon came to circulate even in China, especially in and around Guangzhou. By the 19th century Spanish dollars were widely circulating as-is in many parts of the region, rather than being melted down; this was especially the case in southern China.

Some 350 million reales worth of silver flowed into China over the course of the 16th-19th centuries, including 150 million in the 18th century alone.[1]