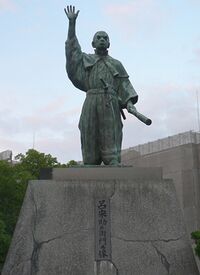 Luzon Sukezaemon was a Japanese merchant from the port of Sakai, who emigrated to Cambodia in the final years of the 16th century.

Originally known as Naya Sukezaemon, he was the son of Sakai merchant Naya Saisuke. He changed his name in 1593 or 1594 after returning from a trip to Luzon in the Philippines. He became successful and wealthy in the South Seas trade, particularly from selling porcelains to Toyotomi Hideyoshi and other powerful lords. It is said that even the great tea master Sen no Rikyû prized some of the tea wares brought back from Southeast Asia by Sukezaemon. Sukezaemon built himself a lavish Western-style house in Sakai and lived a rather luxurious lifestyle for several years before attracting the attention and the ire of Hideyoshi. In 1598, the warlord accused the merchant on bogus charges, and confiscated all his possessions; Sukezaemon entrusted his home to his family's temple, the Daian-ji, and fled Japan for Cambodia.

Very little is known about Sukezaemon from original sources, but like many merchant sailors and maritime adventurers of the period, a number of legends have arisen about him. He has been conflated with the pirate Tai Fusa who attacked Manila some years earlier and was defeated; according to some tales, when Sukezaemon left Japan he took one hundred men with him and led a raid or assault on Manila, but was ultimately forced to flee to Cambodia. Other sources omit the piracy and violence and indicate simply that he remained in Manila until, around 1607, when the Spanish began to impose stronger restrictions on Japanese in the Philippines, and Sukezaemon fled to Cambodia, where he earned the trust of the local authorities and began to trade once more.

He is buried at the Daian-ji in Sakai, and bronze statues of him can be seen in that city, and in Manila as well. He appeared in a novel by Shiroyama Saburô, and in a 1978 Taiga drama called Ôgon no Hibi.