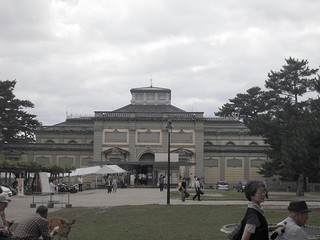 The main building (honkan) at the Nara National Museum.

The Nara National Museum is one of four top-tier national museums in Japan, along with museums located in Tokyo, Kyoto, and Dazaifu (Kyushu). It specializes in Buddhist art, and is home every year to a temporary exhibit showing treasures from the Shôsôin; the exhibit regularly attracts the most visitors of temporary/special museum exhibits, worldwide.

A predecessor to the official museum, from 1875 to 1877, a combination public-private effort saw treasures from the Shôsôin and various other temples displayed inside the Great Buddha Hall at Tôdai-ji. The museum was formally established in 1889, alongside the Tokyo and Kyoto National Museums. The exhibition hall, designed by Katayama Tôkuma, was completed and opened in 1895. The museum changed names several times over its history, from being the Nara Imperial Museum originally, to the National Museum Nara Annex following World War II, and then in 1952, becoming the Nara National Museum.