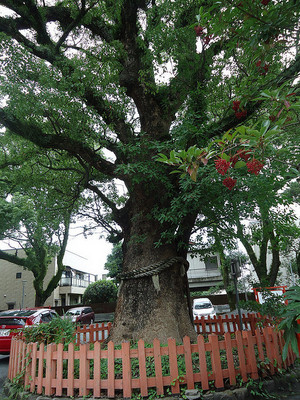 A kusunoki at Arata Hachiman Shrine in Kagoshima

Kusunoki, or camphor, is an aromatic wood used extensively in traditional Japanese architecture, Buddhist sculpture, and cabinetry. It is particularly often used in the construction of chests and boxes, as it naturally repels insects which would otherwise do damage to textiles, paper, or other contents, and to the box itself.

Despite the widespread presence of camphor trees in Japan, and its rather extensive use, in the Edo period at least, imported camphor was found to out-compete the domestic product. A camphor monopoly guild, or ryûnôza, was established at Nagasaki in 1768 to handle the distribution of domestically-produced camphor wood, but it was abolished shortly afterwards, in 1782, as imported camphor dominated the market.