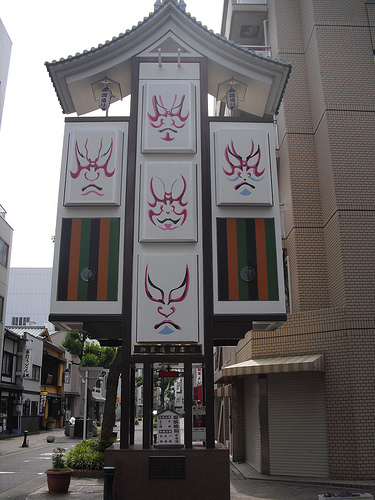 Some famous kumadori patterns, on display outside the Misono-za kabuki theatre in Nagoya.

Kumadori is stage makeup worn by kabuki actors, particularly when performing in the bold and bombastic aragoto style. Kumadori makeup generally consists of brightly colored stripes or patterns over a white foundation, the colors and patterns symbolizing aspects of the actor's character. Though kumadori was originated and developed extensively by members of the Ichikawa Danjûrô line of actors, some conventions are creations of the Onoe Kikugorô line.

The term also applies to a painting method in which two brushes are used simultaneously, one for the color and the other used to create shading or other details.