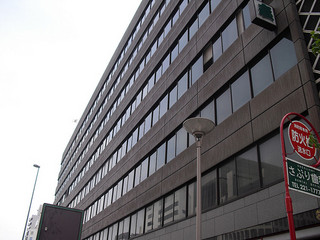 The facade of the Misono-za.

The Misono-za, first built in 1895, is a kabuki theatre in Nagoya, and one of the major kabuki theatres in the country. Over the years, it has seen many major events, including the shûmei (name succession) ceremonies of numerous famous and popular actors.

The theatre celebrated its official opening performances in 1897. It originally bore a modern facade in emulation of that of the Meiji-za in Tokyo, and originally held 1,516 audience members. The theatre was renovated in 1935, destroyed by Allied bombing in March 1945, rebuilt in October 1947, lost in a fire in February 1961, and rebuilt once again in August 1963. The current building has a wholly modern office building facade.