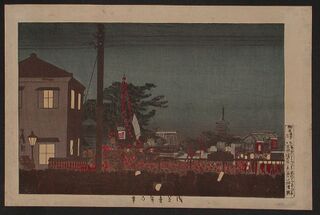 The Asakusa area of Tokyo, in a print by Kobayashi Kiyochika 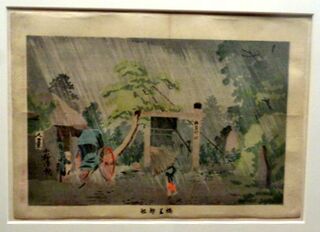 Kobayashi Kiyochika was a pivotal painter and printmaker of the Meiji period, representing the shift from ukiyo-e ("pictures of the floating world") to shin hanga ("new prints"). He is perhaps most known for his prints of scenes around Tokyo which reflect the transformations of modernity. He has been described as "the last important ukiyo-e master and the first noteworthy print artist of modern Japan... [or, perhaps] an anachronistic survival from an earlier age, a minor hero whose best efforts to adapt ukiyo-e to the new world of Meiji Japan were not quite enough"[1].

The son of a government official, Kiyochika played a minor role in fighting for the Tokugawa shogunate in the 1868 battle of Toba-Fushimi. When he was around age 60, Kiyochika began working on an illustrated autobiography; though presumably embellished to a certain extent, this provides some interesting insights into Kiyochika's youth, and how he thought about it later in life. Unfortunately, Kiyochika abandoned the project, leaving it unfinished after covering his abandonment of art around age 22 to pursue a life by the sword. As it turns out, Kiyochika was quite poor at swordplay, and returned to art soon afterward.

Drawing and painting from a young age, he was heavily influenced by Western art, which he studied under Charles Wirgman; he also based a lot of his work on Western etchings, lithographs, and photographs which became widely available in Japan in the Meiji period. Kiyochika also studied Japanese art under the great artists Kawanabe Kyôsai and Shibata Zeshin.

His woodblock prints stand apart from those of the earlier Edo period, incorporating not only Western styles but also Western subjects, as he depicted the introduction of such things as horse-drawn carriages, clocktowers, and railroads to Tokyo. These show considerable influence from the landscapes of Hokusai and Hiroshige, and the work of Utagawa Kuniyoshi, but the Western influence is also unquestionable; these are much darker images on the whole, and share many features with Western lithographs and etchings of the time. These were produced primarily from 1876 to 1881. One of his most significant works early in his career was a woodblock print of a cat and paper lantern, done with 40 blocks, in a realistic style emulating that of Western etchings, and shown at the 1877 First Domestic Industrial Exposition.

Kiyochika also experimented at this time with a style which came to be known as kôsenga (lit. "light line pictures"), which employed subdued color schemes, and a distinct lack of outlines.

On January 26, 1881, a fire broke out in the Ryôgoku neighborhood of Tokyo which would end up being the worst fire of the entire Meiji period. Kiyochika lost his home and much of his possessions in the fire. He produced many paintings and prints depicting the fire, and is said to have been so preoccupied with sketching the blaze that he did not return home to check on, or do anything to protect, his home or family; his wife left him shortly afterward. These images of the fire would be his last kôsenga.

Kiyochika would continue to publish ukiyo-e prints for the rest of his life, but also worked extensively in illustrations and sketches for newspapers, magazines, and books, including working as the top artist for the Marumaru Chinbun from 1882-1893. He produced a series "100 Views of Musashi" in 1884, closely based upon Hiroshige's "100 Famous Sites of Edo."

In 1894-1895, and again in 1904-1905, Kiyochika produced a number of prints depicting scenes from the Sino-Japanese War and Russo-Japanese War, which are now also among his most famous pieces. These were not officially commissioned by the government, but were simply produced independently, a representation of nationalistic sentiment (and/or an attempt to cater to a nationalistic market).

In his last years, Kiyochika turned from prints and illustrations to Nihonga painting, producing a number of vibrant, full-color works.