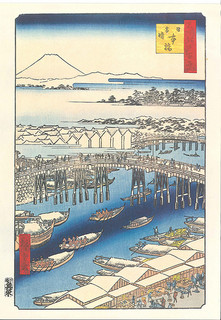 Hiroshige is one of the most famous and celebrated ukiyo-e artists. He is known chiefly for his landscapes. His "Fifty-Three Stations of the Tôkaidô" being perhaps the most famous of his meisho-e (pictures of famous places).

Born in 1797, Hiroshige was the son of Andô Gen'emon, a warden of the fire brigade responsible for protecting Edo castle. He had three sisters, two of whom were considerably older. He sketched and painted as a young boy, and may have studied under Okajima Rinsai, a member of the fire brigade who had in turn studied under a master of the Kanô school.[2] Hiroshige lost his mother in 1809, and became the head of household that same year, receiving a position on the fire brigade in the wake of his father's resignation or retirement; his father died the following year.

In 1811, Hiroshige began studying under Utagawa Toyohiro, after being rejected by both the more prominent Utagawa Toyokuni and Toyohiro himself several times. He was granted the character "hiro" from his master's name the following year, taking on the art-name Ichiyûsai Hiroshige. Around this time he also studied painting in the styles of the Kanô and Shijô schools.

Hiroshige's first published work was an illustration for a book of kyôka poems entitled Kyôka Murasaki no maki, published in 1818, when he was 21 years old. Soon afterwards, he began to see some of his bijinga images published as full-size single-sheet prints.[3]

In 1823, he passed on his responsibilities as a member of the fire brigade to his son, and devoted his attention more fully to his art, though he continued to earn a samurai stipend until 1830 or so. Around this time he also shifted from producing images of warriors and kabuki actors in the style of his master Toyohiro to bijinga images of beauties, in a style influenced by Kikugawa Eizan and Keisai Eisen.

Utagawa Toyohiro died in 1828. Rather than take over the master's atelier, and take on the name Toyohiro II, Hiroshige broke away and began devoting his attention to landscapes and nature studies.

In the eighth month of 1832, Hiroshige began a journey to Kyoto, along the Tôkaidô, during which he would create sketches which would later become his Fifty-Three Stations prints series. He made this journey as an official painter for a shogunate mission to Kyoto, accompanying a pair of horses the shogun was presenting to the Emperor as a gift;[4] Hiroshige was charged with recording various ceremonies and other events associated with the mission. The series was initially released as individual prints, one at a time, over the course of the weeks and months of 1833-1834, but once the last print in the series was released, all fifty-three came to be sold as a set. Over the course of his career, Hiroshige would go on to produce nearly two dozen other series of images of the Tôkaidô, probably at the urging of his publishers, including one set co-designed with Utagawa Kunisada. He then also designed a popular series of the "Sixty-Nine Stations of the Kiso Kaidô," as well as many other series of meisho-e, including "Eight Views of Ômi" and images of famous sites in Kyoto. Hiroshige also produced a number of bird-and-flower prints.

For a time in the early 1840s, in response to shifts in demand spurred by the Tenpô Reforms, Hiroshige returned to images of actors, warriors, beauties, and other figures, before returning once more to the production of landscapes. He was also commissioned around this time to produce a number of hanging scroll paintings.

Hiroshige died in 1858, possibly a victim of the cholera epidemic which swept through Edo at that time. His last great series was "One Hundred Famous Views of Edo" (Meisho Edo hyakkei), published serially between 1856 and 1859.[5] His son-in-law produced prints under the name Hiroshige as well, and was followed by another of his students, known today as Utagawa Hiroshige III.